Farewell is my first short animated film and it was done many years ago, in Brazil. All made in the old way, with no computers and (besides all paper hand-drawn) also hand-painted and shot on 35mm film, on a mechanical rostrum camera. It was very expensive (at least for my pocket), to produce animation films, at that time. I made it with my own money, I earned doing commissioned jobs for publicity. 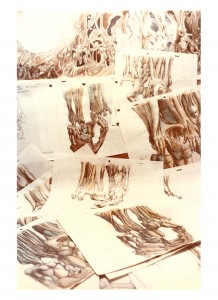 I learned animation and drawing by myself. There were no schools specialized in animation, when I started, and the main animation book was the Preston Blair Animation, in two fascicles. Even The Illusion of Life, from Thomas & Johnston, was not yet published. My main learning method, then, was to watch, frame by frame, Super-8mm films from Disney, MGM and WB. They were sold in 5 to 7 minutes reels, to be projected at home, in children parties.

I started doing quite well with advertising films, but you don´t have too much to develop on Timing and Acting with publicity. Farewell was a way for me to better study animation.

I learned a lot doing this film, but another thing to consider, was that I hadn´t means to do pencil tests. Digital tests were not available yet. It was very expensive to buy, in Brazil, the magnetic video equipment to do such tests, which carried hefty taxes. Tests with film stock, chemically developed, were equally very expensive. So, basically, I had to concentrate a lot, to be sure about what I was doing. And any correction, after the rushes, had to be absolutely necessary, since it would cost so much.

Besides animation itself, my goal with Farewell, was also to develop a very different way to tell stories. I always liked the Magical Realism literature genre, mainly the Argentinian writers Jorge Luis Borges and Julio Cortázar and thinking on how to use André Breton’s automatic writing concept to develop a screenplay, I created Farewell. The principle I used was to freely create the storyboard, without a previously written screenplay. At certain point, when the story was starting to make sense, but not completed, I would produce the whole animation of that sequence. After that, I would work on the storyboard again, but trying to deconstruct the sense of what came before. The intent was to make something that captures the attention of the viewer, but cannot be fully understood.

The themes of the film were mainly two, all them from my personal life: The death of my sister and the political situation in Brazil. All my childhood happened along the Brazilian military dictatorship with some close people in my family, particularly affected by it. The feeling of oppression and lack of liberty followed me until the beginning of my twenties. Besides that, my sister Sandra, ten years older than I, and a very good and lovely friend of mine, suffered with multiple sclerosis for ten years, before she died, looking into my eyes, when I was eighteen. Farewell is my catharsis. Watch the movie and you will understand.

The film was selected for competition in many important Festivals at its time, as Annecy, Utrecht, New York, Rio, Tampere, and others. It received some awards, including, Best Short Film – White Coral- at the International Cinema Festival of Havana, Cuba. When screened in Annecy, Farewell got the attention of a young group of organizers, from the Bristol Animation Festival. They congratulated me, and invited me and my film to be guests at Bristol´s. What a fortunate serendipity, since I was starting to live in London and that would help me to be known. I sent the cans to the Festival Committee and, a few weeks later, received a call from a lady that told me Farewell was not selected. I argued that there was some mistake, since my film was invited by the organizers, and not submitted for selection. But the lady just sent me my film back. 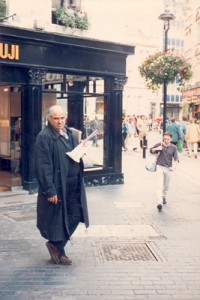 Oscar Grillo, a friend of mine that knew everybody in the animation field in UK, heard from me the whole Bristol story, and investigated what really happened. So, yes, the young organizers really invited my film to be screened in the guest artist category, but the superior of them, an older man, didn´t like my film at all. He declared that such (-film-) would be only showed in the Bristol Festival, if in the backdoor of the toilets. The story spread all around, and I began to receive many invitations, to show privately my film, from many studios and artists, as Richard Williams, for instance. Sometimes to be rejected can be very helpful.

Farewell is sort of a film outside of the curve and if we lived in a more interesting world, I would do only this kind of film. Not necessarily so violent, but taken from deep inside of me.

The other films of mine I classified as Experimental, and did include in this post, are D Day and Expansion. Both, actually, are pop promos, or short films to promote the music from pop musical bands. As they have lyrics and tiny budgets, the result is not full of free expression, as in Farewell. But it was a lot of joy to do these films, and there is always something to experiment with them.

D Day, for the Suvaca di Prata funk rock independent band, from Recife, Brazil, was done very rapidly, with limited and stylized animation. Pablo Lopes, the group producer, came with the idea that everybody in the world would get a Suvaca di Prata CD, but George Bush. And because George didn´t get his CD, he decided to declare war. Bush was the American President then, and the Iraq invasion, even being Saddam Hussein likewise not very popular, did not help George to be loved in Brazil, especially because of all the Iraq civilians’ deaths.

I liked the idea, but included James Brown coming in the last minute, to save the world and send Bush to prison. I also included many other details and, finally, put all the World´s politicians in jail, together with Saddam and George. But I spared Nelson Mandela. After all, he is a jolly good fellow, and had already spent enough time in the cage.

Some people say that when you do animation, you play you are God. It´s true.

Expansion, for the musical group O Jardim das Horas, from Fortaleza, Brazil, has very few scenes animated by myself. Most of the animation was done by the NUPA´s students, and were part of their learning exercises. A portion of it was done particularly for this video, inspired by its lyrics and synchronized with the music rhythm. It´s easy to perceive that, some drawings, are from beginners, but I used that to the advantage of the films art direction, as I explain next.

The lyrics talk about “Something different that is coming”, a new Time and something we need to understand about it. I connected this message with the spontaneity of the students and the fact that they ignore the animation canons, to take Dadaism as the first reference to the art direction. In addition, as this film would be obligatorily a “collage” of mismatched and contrasting images and scenes, and since collage is a typical early Modernism artistic concept, Modern Art History became the reference to everything in this film.

If the viewer knows something about Modern Art, she/he will easily identify with the references. For instance, the scene with the musicians on the top roof of Copan (a famous modern building of São Paulo), with Laya Lopes the singer, naked, sitting together with the other two musicians, Raphael and Carlos Gadelha, pays a tribute to Édouard Manet´s painting “Le déjeuner sur l´herbe”. Such canvas is not only the most borrowed composition of all times but, furthermore, is considered, by many scholars, the first Modern Painting in history.

Left: The Manet´s Déjeuner Sur L´Hérbe painting, 1863.
Center: Actually Manet´s composition, so borrowed by so many artists, it was itself borrowed from a detail of Raffaello Sanzio´s drawing, The Judgement of Paris, carved circa 1510, by Marcantonio Raimondi.
Right: One of the many variations Picasso did on Manet´s Déjeuner.

I also did the Expansion musical film with all that in mind, so I can use it in art classes. Besides it, I experimented with my own elaboration, the gaps and bonds of Modern Art with Animation.

My work for this film, as director, was mainly to create all the composites and to reanimate everything together, integrated with the music. I also did some animations myself, or worked very close with some of the more advanced students, to improve the quality of their contributions.

Also to note, a lot of the elements and props of the background, that represent São Paulo city architecture and urban landscape, were created for this film by the illustrator and cartoonist Orlando Pedroso. After all, this film is NUPA´s work too, and all the principles I mentioned in NUPA´s specific post are equally valid to it.