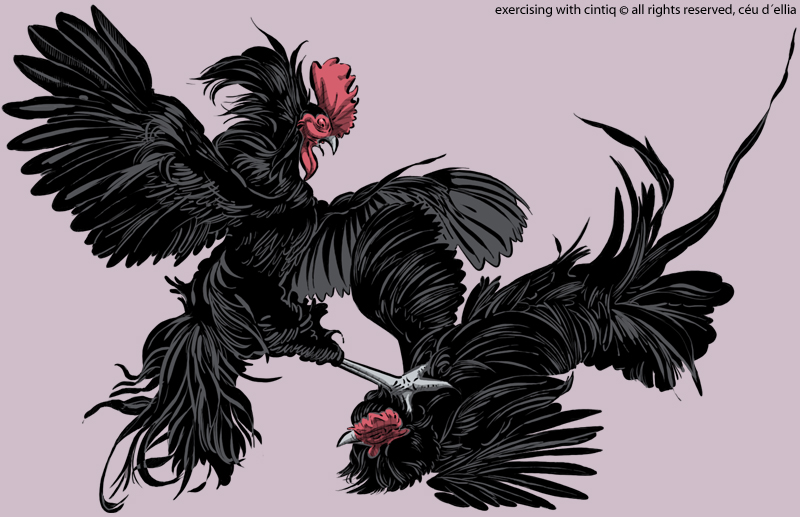 It was Barry Ward, Mr. Bardel himself, who advised me to learn how to draw on Cintiq. My final resistance vanished after I did some research and found out that Dave Gibbons, the meticulous and rigorous British penciller-inker artist, has been working 100% digital for a long time.

Years ago Barry mentioned that some artist, working in his studio Bardel, got so absorbed with the digital tool, he thought he was working with a real pencil. After effacing some lines with the Cintiq eraser, the artist blew the screen to clean it from (imaginary) rubber crumbs.

When Barry told me that, I thought that as an exaggeration. Well, it was not. In my third day drawing with I was doing the same and blowing on imaginary eraser specks. 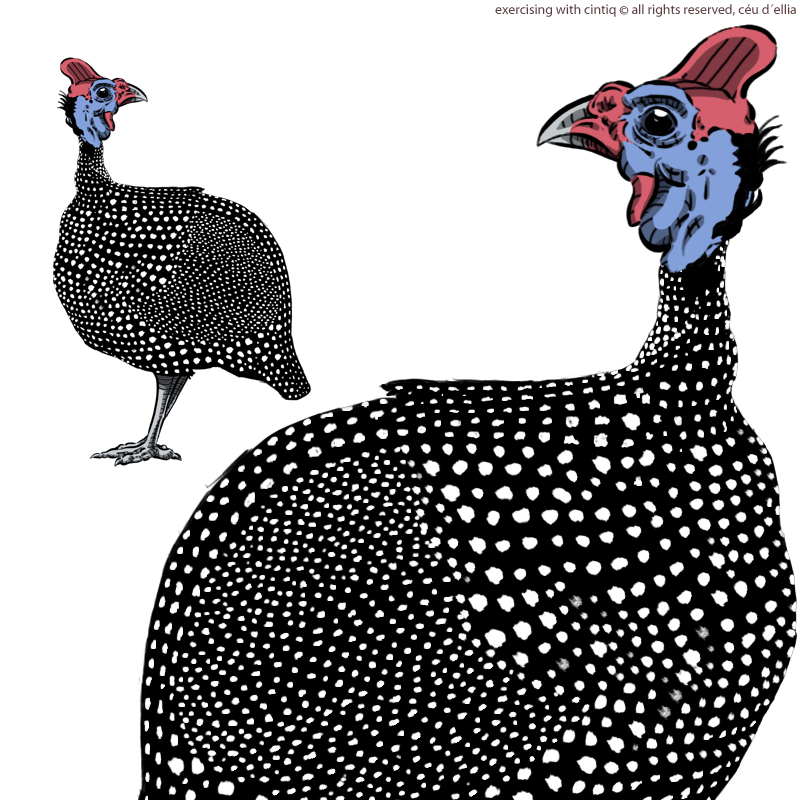 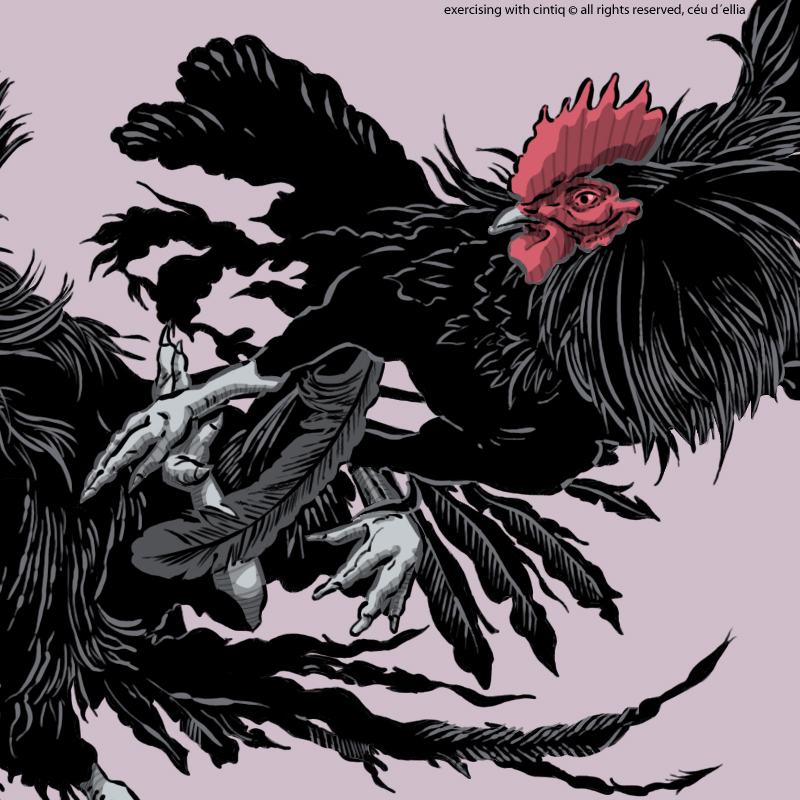 For now I only used Cintiq for a week, doing some free exercises on Photoshop. The first hours were very boring, patiently adapting my hand and brain to the weight of the pen, meanwhile drawing a lot of free-hand circles. After one night of sleep, my gray matter adjusted and I started the exercises you see in this post. 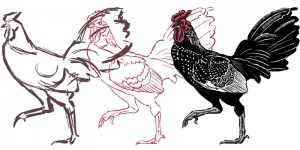 What I most liked is that you can draw, in the same file, with very different relative view sizes. So I can draw, as a base layer, a very loose and small rough lay out, concentrated only in the best action and balance lines. Then I can adjust my view size, do create a second layer, and drop the first pencil straight over the first rough. Usually, to do that on paper, I would draw a very small thumbnail sketch. Then I would need to enlarge it in a second print, with a photocopier or scan device. It would take so much time that, even if the results were always quite good, I would use this method only to do illustrations. For animation or comic pages I would draw small sketches in a separate paper, only as a quick study. Because of all the time you have to spend with the enlargement and transferring phase. But it is not the same as when you can draw straight from your loosest and very free rough lay out, as I can do now, with any piece of work. 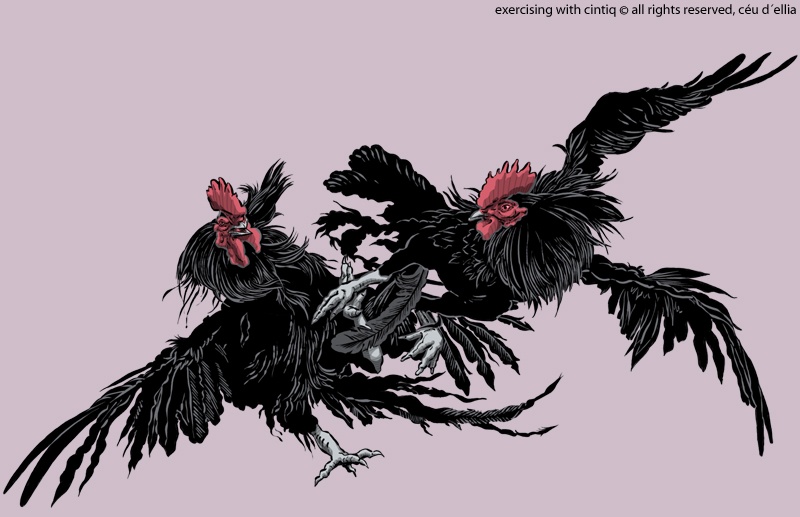 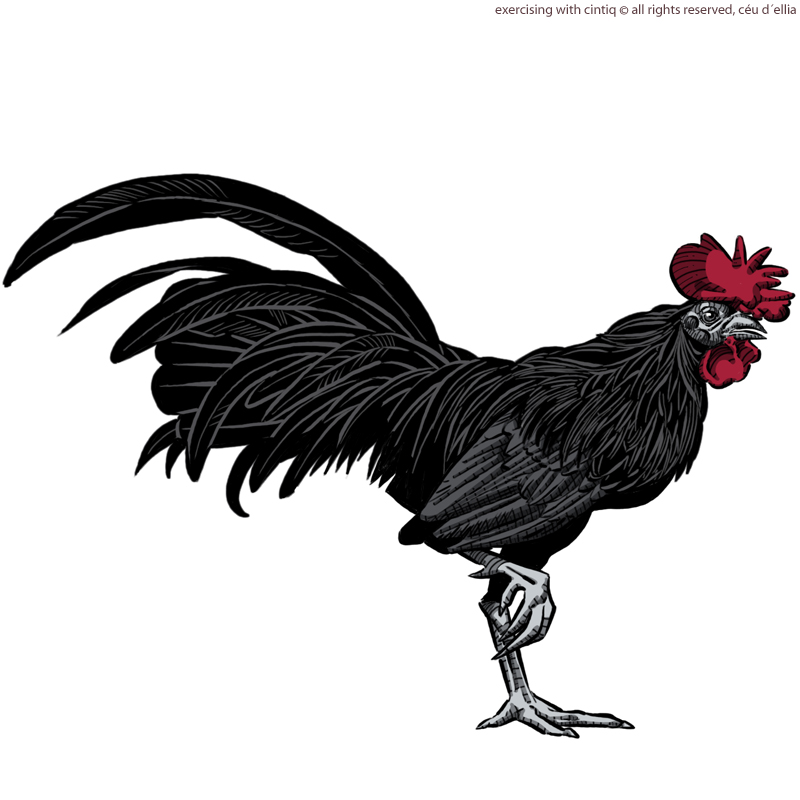 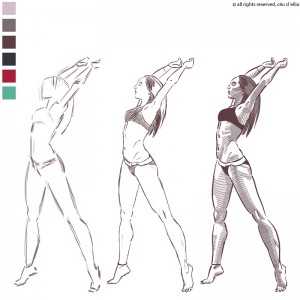 If you use Cintiq with Photoshop you can choose from a myriad of different brushes. But after a while I realized that it depends on how you handle and press the digital pen, with the very same brush you can draw as with a pencil, a fur brush or a pen. It is really very light and precise. It´s like to draw with liquid ink in a couche paper, but without the problem of having wet (and very probably blurred) lines under your wrists. So I did all the drawings you can see here with the same round soft brush.

What it is really not intelligent (from Photoshop) it is that you cannot turn off the cursor. You can change its shape, but not turn it off. So, between the pen and the line there is always this “bug ghost”. I search in the web forums and it is not only me who complains about that. Hope someone in Adobe will hear about that.

Besides the tools and skills learning, I also took these exercises to create this Eshu Yoruba panel. It is a graphic study on an African Yoruba mythological theme, the Eshu Orisha, which controls passages, paths and crossroads. It´s a divinity who is offered roosters, especially the black ones, and that also can interfere in the way beings deal with each other. 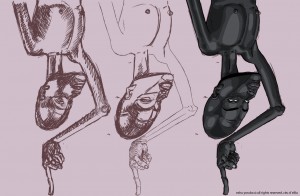 I like to develop my own vision of myths, mixing traditional with non-orthodox elements. It is a way to enlighten myself about archetypes and how they move in the shadows of our limited human perception.

From all the Yoruba Orishas, Eshu is the most controversial. Only because along the colonial times, everything outside the average Christian culture had been filtered by its Manichean standard view. Eshu was wrongly taken as a kind of devil or demon. Actually it represents the intermediary, the arbiter, between what someone wishes to accomplish, and the different possibilities reality can engender. Eshu can also be understood as the Trickster. The deity, full of secret knowledge, that smartly breaks the rules to achieve positive effects (or at least what he/she wants).  It is Reynard the Fox, from the European fables. Or the Coyote, from some Native American cultures, African American folk´s Br´er Rabbit, the Norse mythology´s Loki, among others. 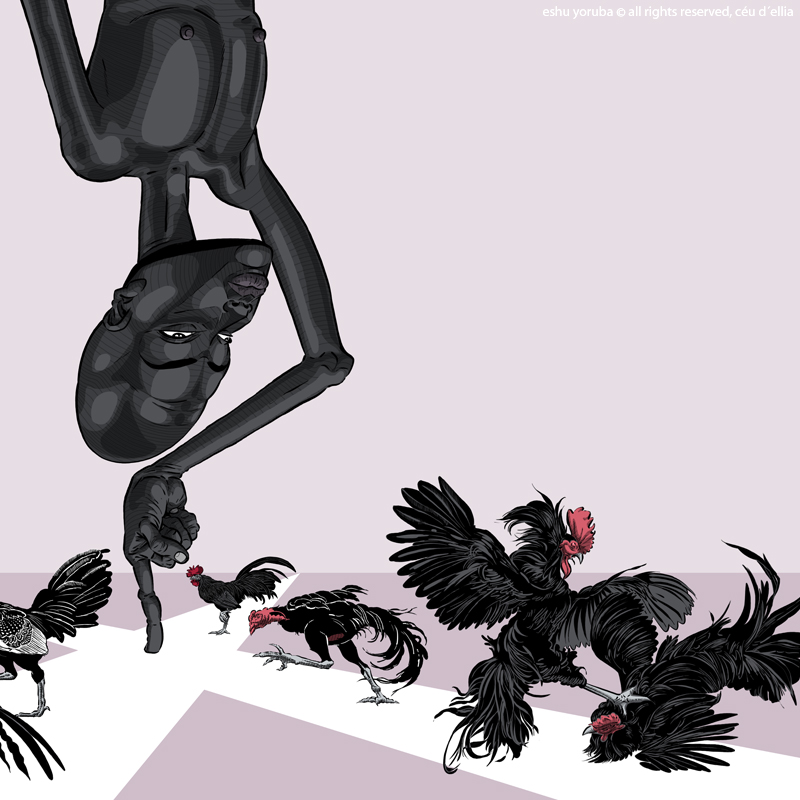 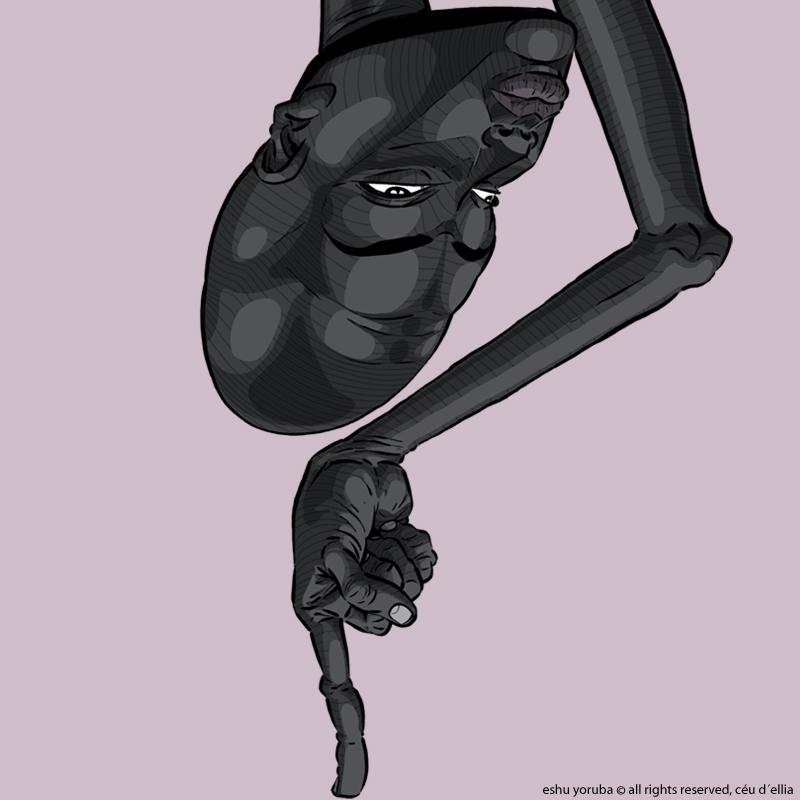 I also like to draw any kind of animal. I love all of them. Now it was rooster time. 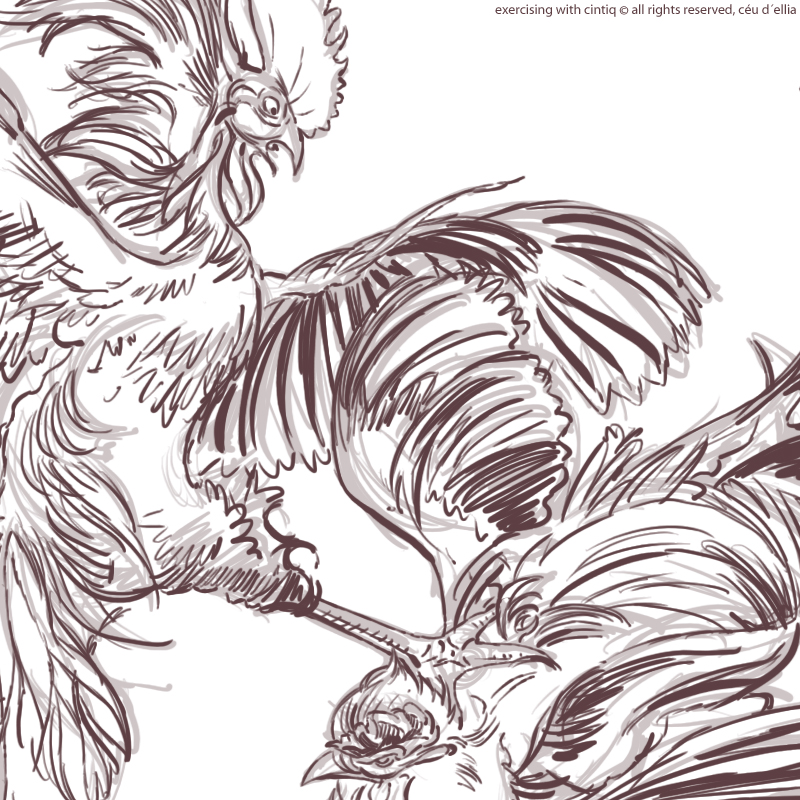 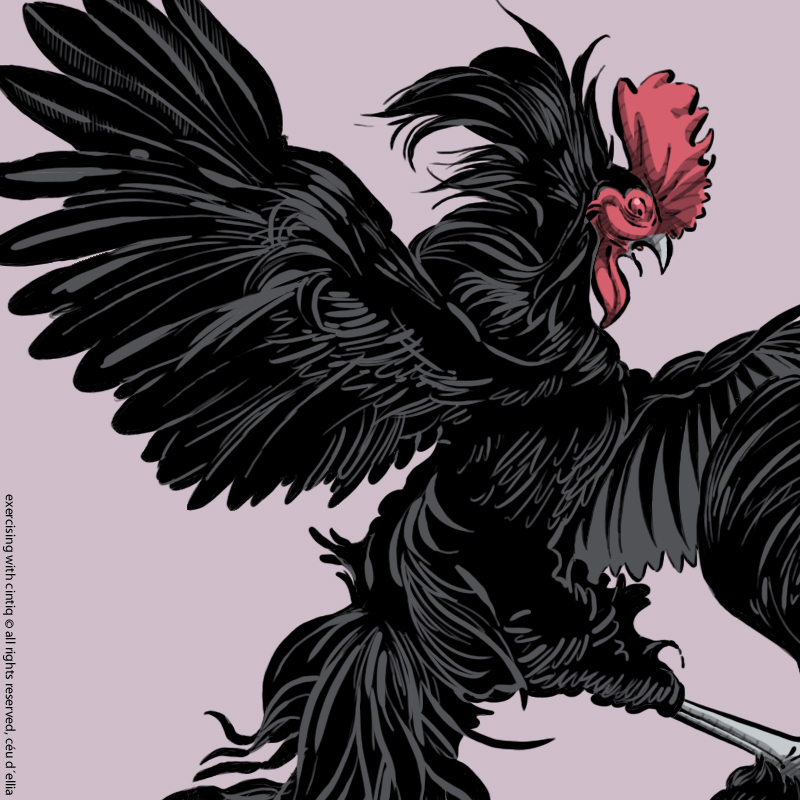 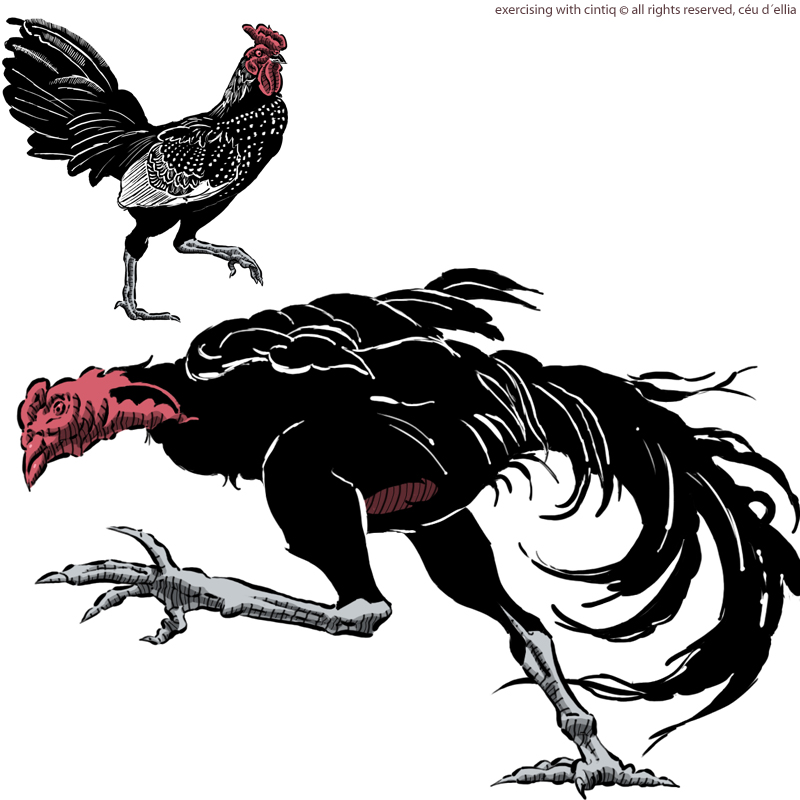